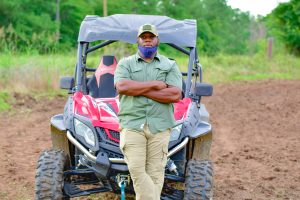 He hooks an immediate left onto a bumpier-riding Lower 5 Points Road.

A few yards into his Smithville, Georgia, drive, he whips another left into a clearing — a half-acre muscadine vineyard in the making — surrounded by more evergreen, coniferous trees. Nearly 100-feet-high pines now guide him straight toward a 1-acre manmade pond dug out by his late grandpa Homer Lee Smothers during the 1980s.

“‘Big Daddy,’ as he was called, planted all these pine trees with my uncles,” said Jones, a retired information technology specialist with the U.S. Army. “He grew close to 150 acres of pine trees in the ’80s to help pay the taxes and so no one could take this land away from us.”

The state of Georgia provides property tax reductions for landowners who actively manage their woodlands. Harvesting timber and recreational leases like agriculture and hunting rights are revenue-generating opportunities to offset the cost of ownership.

But Big Daddy was so adamant about sustaining his land that he joined African-American farmers across the nation in one of the largest civil rights settlements in U.S. history: Pigford v. Glickman.

He and thousands of other farmers won and received $50,000 payments from the 1999 case. The lawsuit claimed the U.S. Department of Agriculture systematically discriminated against Black farmers based on race, denying farm assistance and loans. Thousands of African-American farmers were denied loans between 1983 and 1997 based on race. As a result, many couldn’t maintain or keep their farmland.

Because of Big Daddy’s diligence, Jones and the rest of the grandkids now have something of their own. Sufficient space to:

It’s quite therapeutic for Jones, retracing the footpaths, physical pressures and daily burdens of his grandpa to hold on to more than 150 acres. Suited and booted in his now farmland fatigue, the husky 29-year-old former soldier zig zags through wooded areas.

He’s thinking and rethinking his plan to sustain the land. Seven years prior, Jones was merely thinking of surviving a pressure-cooker career in the Army, which included deployment to Afghanistan in 2014.

“I helped provide a medical unit with IT support in a prison,” he said. “A prison with Taliban prisoners. It was a stressful job.”

Coming from rural beginnings, though, Jones naturally adjusted to those times living in the wilderness. Setting up campsites, fire making, digging trenches and hunting food all prepped him for carrying on his grandpa’s legacy. But the combat side of his career eventually took a toll on him physically. A knee injury worsened to the point he had to shorten his service.

After surgery and going through therapy, Jones initially returned home and found himself lounging around.

Now circling the pond and heading back up Lower 5 Points, another section to the farmland is receiving new tender loving care. Jones parks his dune buggy on the edge of a landscape field. He then limps to 25 acres of wheat growing beside 25 acres of organic peanuts.

He breathes in the open field air as his maternal Uncle Dexter Smothers’ tractor plows away at the soil in the background. “And on the other side of Smithville, we’re growing another 70 acres of sunflowers,” he said proudly smiling and pointing due north.

Jones is learning the agricultural ropes of growing crops from his uncles and certified organic peanut farmer Sedrick “Sed” Rowe of Rowe Organic Farms LLC in Albany. Rowe and Jones have been best friends since middle school. Jones teamed up with Rowe to cultivate 22 acres of organic peanuts through leased land owned by Jones’ paternal Uncle Clay Jones in Americus.

“Sed really opened our eyes to all the things we can do with the land,” said Jones.

The farming projects are keeping Jones so busy he’s looking into additional programs of support. His dad, Booker T. Jones, is on duty, too. “Mr. Homer would be so proud of Dontavius,” said Booker T. Jones. “I’m glad to see this generation shaking off the worries of the past and making new use of the land.”

Booker T. Jones worked 26 years as a maintenance technician with Proctor and Gamble. Today, he’s in prison ministry, helping to reintegrate those released from prison into agricultural careers. He participates in local co-ops to stay on top of the innovative directions agribusinesses are going nowadays as well.

And in Smithville, there’s really nothing to do but ag. The Lee County town of roughly 568 residents is known for its combination of upland and low plains — with Smithville being one of its highest points. Eight miles northwest of Albany, Smithville is laden with timber and nurtures some of the best agricultural soil in the area.

And Big Daddy knew it.

According to the Georgia Forestry Commission, Georgia is home to more than 24 million acres of forestland. More than 445,000 forest landowners — 75 percent owning fewer than 10 acres — possess this profitable, renewable resource.

Big Daddy was so cultured about this asset and growing other crops that his rural community recognized him as “Farmer of the Year.” For more than 30 years, he worked as a self-employed farmer.

“Big Daddy saw the possibilities on the land,” said Dontavius. “I’m going to do everything I can to try to increase what he started.” Photos by Kevin Dantes 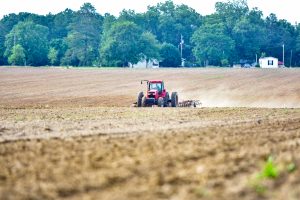