Donnie McCrary’s youthful eyes and ears witnessed the outdoor altercation. His father, Turner McCrary, confronted land owner Sam Grice about receiving minimum wage. It’s 1965. The annual minimum wage already increased a few years prior from $1.15 to $1.25. “We were just getting a $1 a day to pick peaches back then,” said Donnie, now age 67. “If we didn’t sharecrop on his land, though, we wouldn’t have a place to live.”

Donnie, his parents and eight other siblings all worked the multipurpose 1,000-acre farm in Marshallville, Georgia, throughout the 1950s and ’60s. While the family chopped cotton and raised livestock, Donnie’s mother, Mary, cared for Grice’s two young, white kids. It wasn’t until nightfall that the McCrarys got attention or supper in the two-bedroom house they packed on the property. Those hard-to-watch moments became an impetus for Donnie to gain his independence — one day becoming his own businessman of his own land. That, he did. But it was an uphill battle from the start. Discriminatory practices played a crafty role in his vision’s demise.

Forty-five years later, Donnie lowers himself from his Dodge Ram dually to revisit the 139 acres he once owned and operated in Peach County. For old times’ sake. It’s now mid-July 2020. Sticky and soundless. As global pandemic COVID-19 paralyzes respiratory systems across the nation, Donnie is able to take a deep breath before scanning what was once his. He recalls the very day a white representative from the Farmers Home Administration (FHA) showed up on his property to initiate the process of hijacking his hard work and heart. FHA is a former U.S. Department of Agriculture (USDA) agency created to fund and protect loans for rural farmers and families.

“I remember that day and will never forget it,” said Donnie. “He just started taking pictures of my property.” 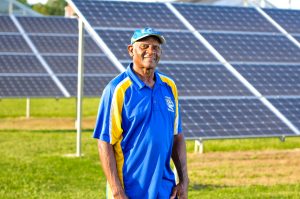 Solar panels replace campus housing for FVSU alumnus Donnie McCrary and his family, which is where his father, Turner, worked as the institution’s farm specialist.

Donnie tried to wave the rep down from his collard green field to ask what was going on. The rep hurried back to his vehicle and sped off. Aged, Hulk-like hands now point to the very spots his farm, D.M. Farms, would experience a series of highs and lows in America’s Black Belt Region elements.

Donnie knew he was a step closer to becoming his own boss the day his father left Grice’s land. Turner moved the family to Fort Valley and started working at 1890 land-grant institution Fort Valley State University on the college’s farm. The university provided campus housing for the McCrarys who lived in one of two gray houses that would have been behind today’s Agricultural Research Station. When Donnie graduated from high school, he got accepted into FVSU and majored in horticulture. After earning a bachelor’s degree, an agriculture research tech associate position became available. Donnie took and held it for 27 years before retiring.

“I’ve probably helped thousands of students learn how to grow and research peaches, guava and papaya,” he said. In a secure staff role, a then 22-year-old Donnie applied for a loan with FHA during 1974. The following year, FHA approved him for $200,000 to cover farmland and equipment. At the time, that was a lot of money for any young Black farmer — or so Donnie thought.

“My first loan officer was a Black man named Mr. Charles Akins, who worked for FHA in Macon, Georgia,” said Donnie. “He stressed to me the amount I was receiving wasn’t much at all. He tried to educate me as much as he could.” FHA approved white farmers for millions more Akins explained. However, Donnie delighted in the fact he became the first African-American farmer in Peach County to own a cab and air tractor. To him, “it showed hope” for Black farmers. 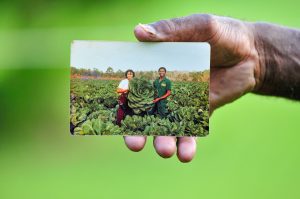 McCrary and late wife Ida pose with one of their signature collard greens on D.M. Farms in Fort Valley, Georgia. McCrary sold collards from his rural community to Atlanta.

Two miles southwest of FVSU sat the farm Donnie wanted. Fertile land with a stream running right through it for irrigation. He established the farmland as a middle-level operation. Not large enough to compete with the “Big Boys.” Not small enough to consider a garden. “It was just the right size,” he said. D.M. Farms produced muscadine grapes, black and blueberries, squash and sweet potatoes. His specialty crop: collard greens. Thirty acres of it. Some weighing up to 6 pounds.

Donnie always kept an edge on the competition in the collard category, too. Because of his extensive fruit and vegetable research at the university, he knew the exact window to grow collards so he hit local stores and stands weeks before neighboring farmers. His collards were in such high demand between late March and early April that warehouses in Atlanta contracted with him. “Collards are a good crop,” Donnie said. “They’re not perishable and can stay in the field longer. I didn’t cut mine until they were sold.”

Consistently pulling in a second income and creating job opportunities for young Black families, the farm seemed like a promising venture to take on full time. “It was a full operation,” he said. “My late wife, Ida, and two small daughters would come out there to help us sometimes.” Then came the blizzard of 1985. That year Donnie’s agricultural empire dwindled to mere yield debris. Throughout each season, the farm battled extreme weather conditions: heat, drought, rain then cold.

By the time Donnie returned to FHA’s Macon office to apply for a replacement loan after 10 years in operation, FHA relocated Akins to its North Georgia office in Athens. A new white representative replaced him. Donnie explained the destruction the blizzard caused. But the white rep wasn’t hearing it. He wouldn’t stand behind a new loan to sustain Donnie’s farm. “When he got that job, Black farmers were losing land by a landslide,” he said. “And everybody knew the money was available.” Donnie lost everything. After the FHA rep photographed Donnie’s land, equipment single file lined off the premises a few days later. His employees had to find new work. 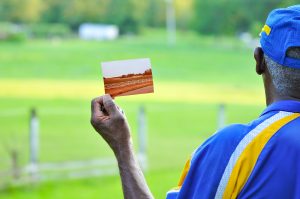 McCrary stands in the exact location of the property fence photo he holds from the 139-acre farmland taken away 45 years ago by USDA’s Farmers Home Administration.

How Donnie coped? “God,” he said. “He is my Savior. I’ve always believed and trusted in Him to keep me going.” The academic researcher still had stability at FVSU. Ida also worked as a librarian at the institution. In the ’90s, Donnie heard about area Black farmers organizing to file a class action discrimination lawsuit against USDA. Pigford v. Glickman claimed the agency showed prejudice against Black farmers on the basis of race. It even alleged the agency failed to investigate or properly respond to complaints from 1981 to 1996. The deadline to submit a claim as a class member was Sept. 12, 2000.

“A lot of us Black farmers started filling out the paperwork to file our claim,” said Donnie. “The $50,000 we ended up winning came years after. It still didn’t cover all that we lose.”

The lawsuit’s goal was to restore Black farmers and their agribusinesses through full debt cancellation; federal and state tax relief; priority of services; access to land; and monetary compensation for economic harm. “I never saw any of these things happen,” he said. Despite the federal government’s slow, ineffective attempts to correct its wrongs, Donnie used his farming failures as a case study for FVSU research students.

One of those former FVSU students is first-generation farmer Sedrick Rowe. Under Donnie’s guidance, Rowe became one of only three certified organic peanut farmers in the State of Georgia. And Rowe is now one of only a few Black farmers licensed to grow hemp in the Peach State. The controversial crop received the green light to sprout in Georgia summer 2020. Donnie has spent months helping Rowe prepare Albany farmland for the historic hemp growing season — from irrigation installation to transplanting seeds by hand.

“Any way I can help Sed and other young Black farmers not make the same mistakes I did at their age, I will,” said Donnie, who now lives in Dougherty County with his present wife Tarlita McCrary. “Sed listens and is taking farming in a whole new direction.” On the 10 acres Rowe farms on the outskirts of Albany, Donnie revisits old habits. He’s using two of the acres to grow his signature collard greens. “Oh, there’s always a market for collard greens,” said Donnie with optimistic eyes. “Always.”

McCrary props on the 1967 Ford pickup his father and ag students used to survey the campus farm. McCrary retired from FVSU and worked as farm manager of Black land trust New Communities in Albany for eight years. Photos by Kevin Dantes