By Candace Dantes
Aug 25, 2020 Leave a comment
in Agribusiness 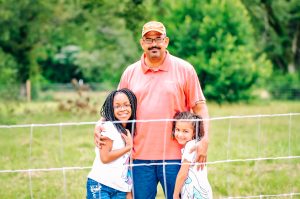 They spring from the family’s Polaris 4-wheeler already knowing the day’s duties. Mariah refills the water troughs. Makinzi replenishes the gatefeeders. The 11- and 9-year-old sisters tend to quarter horses Tango and Cash (named after the 1989 Sylvester Stallone and Kurt Russell action comedy) while their daddy, Arthur Webb, heads out to pasture to check on his developing livestock operation.

After a few horse rubs and issuing of pear treats, the two girls catch up to Webb — like ducklings following their father drake. Contact with cows is new for the pair. Webb, on the other hand, has four decades of experience he gained from a livestock outfit burrowed in Middle Georgia. This year, though, is Webb’s year to head his own cattle company. And he’s starting it in the age of COVID.

On 20 acres off Albany, Georgia’s Lonesome Road, the 6-foot-3-inch towers over his farm girls, explaining the type of cows they’re about to breed and why. Brangus for beef. A cross between a Brahman and Angus, the Brangus breed is either black or red. They’re what you call “higher performers” on pastures — resistant to humidity/heat, unaffected by typical diseases and producers of lean, tender meat. Bulls can reach up to 900 kilograms. Cows about 500 kilograms. And like Brangus, other common breeds in Georgia include Hereford, Angus, Charolais and Simmental.

Mid-July, Webb joined the rural ranks of nearly 23,000 cattle producers in the Peach State. According to the Georgia Cattlemen’s Association, there are more than 1 million head of cattle raised in all 159 counties. If combined, dairy and beef cattle make up Georgia’s second largest commodity. And the industry’s economic impact across the state is estimated at more than $3 billion, too. Producers just have one problem at the moment: the global pandemic. Coronavirus has been interrupting beef processing. 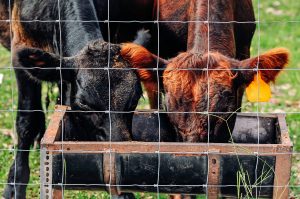 “It’s serious out here,” said Webb, who works full time as a heavy wrecker driver. “I’m not denying that, but if you look around, families are still buying every type of meat you can think of.” Nevertheless, the ag industry is standing on muddy soil. Back in March, the U.S. Cattlemen’s Association (USCA) petitioned the U.S. Department of Agriculture (USDA) to take immediate action to help American cattle producers throughout the pandemic.

“You are well aware of the vast commodity crashes across the board as markets react to the coronavirus and its impact on everyday life,” said Dr. Brooke Miller, USCA president. “The cattle market was on track to recover following the fire at the Tyson Foods meatpacking plant in Holcomb, Kansas, in late summer of 2019. However, since January of this year, the live cattle futures have lost nearly a quarter of their value.” Miller expressed that cattle producers and agriculture lenders are feeling the pandemic pressure.

The association also feared an additional fallout could occur while trying to curb the spread of the virus. A month later USCA estimated the economic impact of COVID-19 on the cattle industry will top $14.6 billion dollars. This figure is based on current and future market data. National Cattlemen’s Beef Association gauged $13 billion dollars in business damages.

By the end of April, disruptions in beef production peaked when roughly 40 percent of America’s beef processing capacity halted due to coronavirus illnesses of packing plant employees. The U.S. Department of Agriculture released a July 2020 “Boxed Beef & Fed Cattle Price Spread Investigation Report” agreeing that COVID-19 has “significantly” disrupted the markets and processing systems used for the production and sale of American beef. Most recently, fewer plants are closed. A ripple of re-openings has occurred in restaurant dining areas across the country. 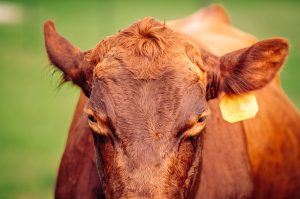 “I’ve experienced really high and really low times on a cattle farm,” he said. “That’s the name of the game.”

Meanwhile, Webb points to his next cattle project with his girls, assembling a solid infrastructure and ensuring his small herd eats healthy. He plans to build and sustain a bankable agribusiness by eventually using feeder cattle. Basically, fattening up steers or heifers prior to selling to the next owner or slaughter. His plan is to buy calves low and sell them at their weaning weight of 500 to 600 pounds to pull in a quicker profit.

The cattle industry is complex. To ensure he’s raising his beef cattle with proper diet and handling in mind, Webb does a lot of virtual networking, reading and watching of RFD TV for agribusiness news. “Daddy looks at that station every Saturday morning,” said Mariah, shaking her head. “He loves that channel.” The network is where Webb learned about cattle management software CattleMax. The days of ledger documenting your herd with smudged ink information are gone.

This digital record-keeping platform is designed to plug in reports about inventory, breeding, medical, calving, financial and weight from your desktop or smartphone. At home or on the land. Webb remembers the long hours required to document cattle data by hand. “The CattleMax app is one thing I’ve been waiting to get,” he said. “Boy, will that save me time.” 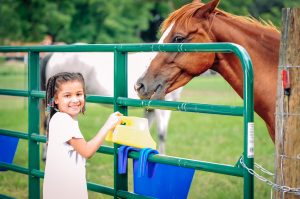 After virtual school and on weekends, Makinzi’s farm chore is always feeding Tango.

His fascination with cattle started at age 8. His godfather owned a Holstein-turned-Hereford operation along the Baldwin/Jones County line called Circle E Double H Farm. Webb couldn’t get enough of everything equine and rural — cows, horses and hunting. Throughout his childhood and teenage years, summers and holidays were spent on the farm helping to mix feed, replace fencing, bale hay and cut firewood. He remembers the time of day and weather conditions the first time he saw a calf birth.

“Sometimes we stayed up all night with them,” he said. “That’s just what you did.”

After high school, Webb enlisted in the Navy for five years, working as a welder with the Naval Mobile Construction Battalion. Any leave time he accrued was used to head back to the farm and contribute to the cattle business. During the early 1990s, he got his commercial driver’s license and long hauled it to every state, except Alaska. Good money and good sightseeing along the way. He eventually settled in Albany and became a local driver, saving his money to buy his first quarter horse.

Missing the memories created on the farm, Webb decided to re-establish them with Mariah and Makinzi. No more than 10 to 12 cows after once working on a nearly 75 cow-calf operation. But right now, he’s busy finishing up the layout of his farmland and working with the U.S. Department of Agriculture’s Natural Resources Conservation Service to secure future financial and technical assistance. “It’s possible,” said Webb. “Just one day at a time with my girls. I can see us as a certified grassfed beef farm in the next 10 years. We’ll get there.” 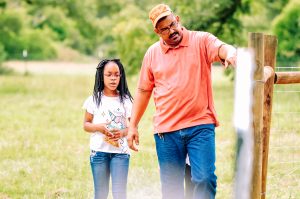