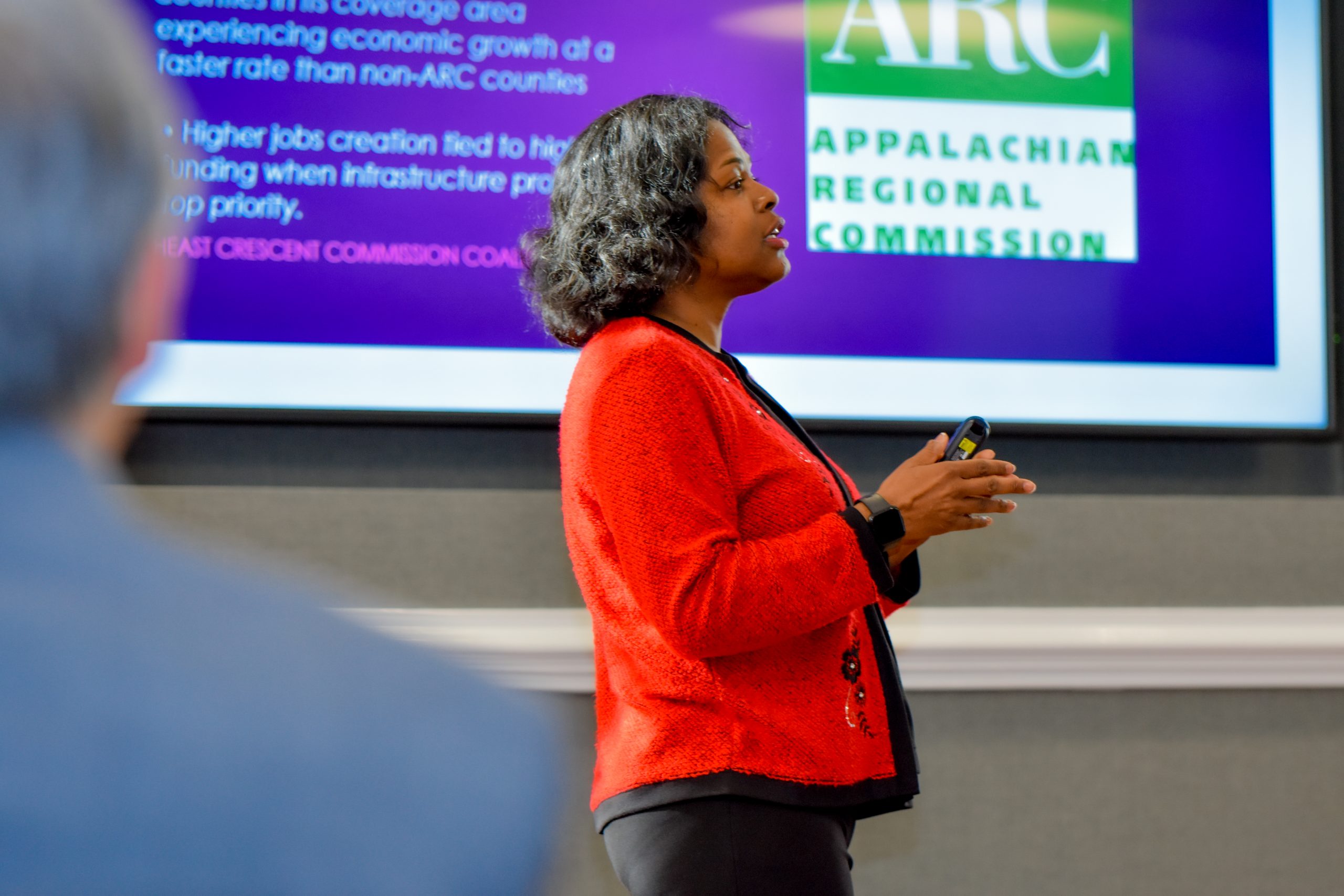 Georgia leaders and influencers met in Milledgeville, Georgia, to continue a conversation that started over a decade ago — establishing a regional commission to move the distressed South into economic prosperity. “It’s overdue,” said Ava Gabrielle-Wise, founder, president and CEO of U.S. Sustainable Development Corp., an accredited non-governmental organization in consultative status with the United Nations. “It’s a simple idea but has taken us now 11 years to gain buy-in.”

Gabrielle-Wise led the Feb. 27 state informational session hosted by Georgia College’s Rural Studies Institute. The session invited representatives from the federal, state and local government levels; 1862 and 1890 land grant universities; and community-based agencies and practitioners to discuss the reactivation of the Southern Crescent Regional Commission (SCRC) and securing a Senate “champion” to push it through this time.

SCRC is a federally funded, economic development go-between in partnership with seven Southern states — Georgia, Alabama, Florida, Mississippi, North Carolina, South Carolina and Virginia — to stimulate growth in underdeveloped and underserved Southern areas of the nation. The 2008 Farm Bill conference report authorized the establishment of SCRC to help address community and economic development needs of the most impoverished portions of the Southeastern United States. The bill was initially approved for $30 million annually. Congress provided $250,000 under the Energy and Water Appropriations bill to help start up the commission.

“During that same time, $1.5 million was appropriated to a much smaller region — Northern Border Regional Commission,” said Gabrielle-Wise, who specializes in community and economic development. “It was able to get off the ground.” But SCRC never did. What happened? “I got every answer,” Gabrielle-Wise said. “I heard it was because of the 2008 economy slow down, too many other issues to deal with and even because of reservations from particular people.”

If fully supported this go-round, the commission could help alleviate persistent poverty for rural people and communities, especially those of America’s Black Belt Region — the crescent-shaped geographic region that includes hundreds of counties with large African-American populations spanning from Virginia to Texas. However, areas specifically covered through the commission, though, would include all counties in the seven-state region mentioned and not already served by the Appalachian Regional Commission (the standard bearer for successful commissions) or Delta Regional Authority (another up-and-running commission).

“The Appalachian Regional Commission has nearly $4 billion in direct federal investment since 1964,” she said. “This can be directly attributed to rural counties in its coverage area experiencing economic growth at a faster rate than non-Appalachian Regional Commission counties.” There is more than 50 years of empirical data to document the success of federal commissions. They generate jobs and a return for federal, state and local levels. This knowledge made session attendee Valerie Hill Rawls, director of The New Georgia Project Black Green Agenda, hopeful. “I can see this baby that was birthed 11 years ago coming to life this time,” said Hill Rawls. “It is time, especially with the energy women like Dr. Veronica Womack and Ava Gabrielle-Wise have put into uplifting the South, to make SCRC happen.”

Gabrielle-Wise and Womack, Rural Studies Institute (RSI) executive director, have tackled rural economic development issues for the past 20 years. “We’ve gone on this journey to educate rural communities about real solutions to become more economically competitive for a while now,” said Womack. “We know the potential of the South. It can become a place of economic strength.”

The first meeting to readdress the commission took place Dec. 9, 2019, in Washington, D.C. Gabrielle-Wise has been traveling the South holding informational sessions to re-educate the public about the importance of SCRC to sustain the South. She will take feedback, questions and concerns with her to a “Hill Briefing” with Congressman Jim Clyburn March 26. “By then, I want to be able to give a story about this region,” she said, “and what’s really important to the communities of this area. Reactivating SCRC isn’t just about ending poverty but building wealth.”

Click here to have your Southern voice heard about this topic before the “Hill Briefing.”

She ended her collegiate career as part of a historic class. The class of...