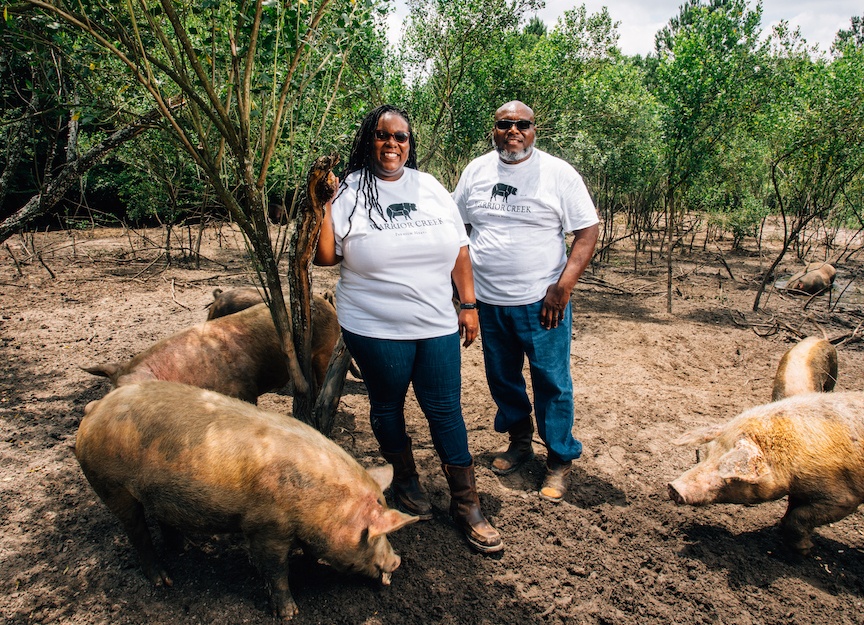 Interestingly, 21st-century farmers still convene and adjourn on these familiar sites. Member farmers of AgFirst Community Cooperative of Kentucky have already used Michael J. Andrews’ barn twice this year for meetups. “Plenty of greenspace for us to come together,” he said. Andrews is a third-generation independent soybean, tobacco, corn and wheat farmer. After 40 years, the 63-year-old former resource manager retired from the U.S. Department of Agriculture (USDA) Natural Resources Conservation Service. He opens his 200-acre farm to cooperative meetings. Hands-on training for younger Todd County producers.

Like AgFirst, newer agricultural associations have emerged to not only sustain traditions of past Black farming groups. But learn and apply best practices to compete in The Digital Age. One of co-op’s action items: use the Web more effectively to sell products and services. With the help of online technologies, AgFirst wants to close the gap between generations of African-American producers. “Our young people know this technology well,” said Dr. Nancy Dawson, 54, founding director of AgFirst’s Kentucky chapter and former associate professor of African American Studies. “We have to merge their knowledge with our farmers’ experiences.”

Black farmers are older than the average U.S. producer. Age 60 vs. 57, according to a 2017 USDA Census of Agriculture report. During that same year, there were fewer than 35,000 Black-operated farms. Less than 2 percent of the nation’s farmland. A serious plummet from 1920. During the “Roaring 20s,” America housed more than 925,000 Black-run farms. Representing more than 14 percent of all U.S. operations. Inflated foreclosure rates, backbreaking loan terms and biased USDA programs were original contributors to the decline of Black land ownership.

“There was so much paperwork,” said Andrews. “Minority landowners didn’t even want to fill out the application.” However, contemporary farmers and co-ops are now having to keep up with where markets are conducting new business — online. That means understanding how the digital economy works. Typically involving a social presence (ex: Facebook, Instagram or TikTok) as a promotional tool. An eCommerce or lead generation website to target specific customers and sell products in a few swipes of a smartphone.

It applied and became recipient of a 2021 “Marketing & Branding Makeover” through USDA grant project Black Farmers’ Network. As part of the makeover experience, the network’s award-winning professionals coach farmers through effective digital strategies to reach untapped audiences. The co-op’s campaign is to enter 2022 with an enterprising landing page and accompanying branding collateral. Become a new standard for Black farming groups to build awareness and online revenue streams.

AgFirst organized 2016, assembling up to 15 Black Belt Region and Appalachian farms by 2020. First in Georgia. Then in Kentucky. It combines veteran and beginner agriculturalists: row croppers, livestockers, urban gardeners and meat processors. Totaling more than 1,000 acres collectively. COVID interrupted 2020 meetings. So Georgia and Kentucky members physically linked up again May 2021 in Poulan, Georgia. They gathered at processing plant Towson Meats.

At 38, she’s the only commercial hog-producing African-American female in South Georgia, too. “We have to get all our member farmers to this point,” said Ricky Dollison, “where they’re doing business online.” One of the earliest forms of Black farmers mobilizing to advance in agriculture happened in 1886. The Colored Farmers’ Alliance (CFA) marshaled in Houston County, Texas, to confront economic challenges and a flawed federal system.

The landless people consolidated and spread throughout the Black Belt Region. At one point accumulating up to a million members. CFA preached economic self-sufficiency. Put words into action: taught new farming techniques; improved educational backgrounds; published a weekly newspaper about farm issues; sponsored cooperative stores at Southern ports; and took ownership of their homes. The righteous cause would disband within a six-year period. Due to internal differences and external racism/discrimination.

Comparable cooperatives followed. The co-op lifestyle of Black producers gained new publicity during the Civil Rights Movement. African-American farmer attitudes toward organizing were bolder. They joined the National Association for the Advancement of Colored People and formed more structured cooperatives to tackle racial discrimination in commercial trading arenas. A large, well-known and frequently boycotted co-op was the South West Alabama Farmers Cooperative Association. It and others helped create a template and discovered need — cooperative education and technical assistance to co-ops and credit unions.

Baby steps, Andrews suggests. He knows from history and USDA experience. Take the time to show younger and beginner farmers the ropes. Take the time to also learn from them. AgFirst wants to foster collaboration among its members and advancement into the digital economy. “Jealousy destroys our Black farmers,” said Andrews. “Systems have worked against us. We’ve got to work through it all.”

Steady…steady…BANG! A clear shot takes the 2-foot-long cottonmouth snake out as it slithers into...

J.B. Brantley strapped the cotton down by wagon. Hauled his cash money crop by...

Who. Is. Lucy? And why is an unauthorized power line cutting through her burial...